Ms Batten said she had two regular suppliers but one had recently changed its formula, resulting in a decline in Cooper’s health.

“We put it down to a change in the oil. We had a new order come through and I questioned it the day it arrived; it looked and smelled different.

“When we started using that oil, Cooper started having seizures. The supplier said they changed the base oil, a different brand.

“It just shows the slightest change can affect them and this is why it needs to be regulated.”

Ms Batten said she received some oil from her other supplier, but now a three-week wait for his cannabis plants to mature had the family on tenterhooks.

“We’ve reduced Cooper’s oil down slightly, hoping to stretch what we have until the plants are ready to have more oil made by the doctor,’’ she said.

“We’ve got major concerns because we’re nearly out of that oil and no one has anymore of that same type.

“There are other types, but I’m not willing to just try anything.”

Ms Batten said Cooper, who has severe brain damage, cerebral abscesses, hydrocephalus, epilepsy and cerebral palsy, will have daily seizures and would be hospitalised without the oil.

The substance, which is illegal, controls Cooper’s seizures, which numbered in the hundreds before he began the treatment.

While the campaign to legalise medicinal marijuana continues, Ms Batten and Mr Wallace hope to be involved with the process.

“We actually met with the Health Minister’s (Jill Hennessy) office just before the lawyer (Mr Freckelton) was appointed and said we’d like to be involved in any discussions,” Ms Batten said.

Ms Batten said she would advise Dr Freckelton that labs should be set up immediately to analyse the various forms of cannabis oil.

She said she was willing to allow tests during the review to be run with Cooper.

“They’re welcome to look at all of Cooper’s medical records,’’ she said.

“We have his EEG before (taking the cannabis oil) and his EEG after and it shows remarkable difference.”

Dr Freckelton’s appointment as Special Commissioner is effective from January 27 to August 31 this year. 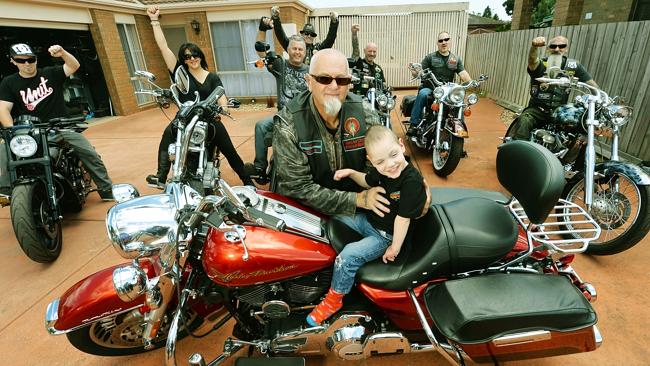 Motorcycle group HWY Hogs is hosting an event to raise money for Cooper this Sunday.

“Before Christmas we put the word out asking if someone with a Harley could drop around and 45 of them came,’’ she said.

“He just went absolutely nuts and they said, ‘what else can we do?’, so they decided to do a ride.”

Ms Batten said the group had organised a side-car for Cooper so he can go on the ride with them.

The ride begins at Bundoora Park at 10.30am and will finish at Flowerdale.

All motorcyclists can participate with a $10 donation.