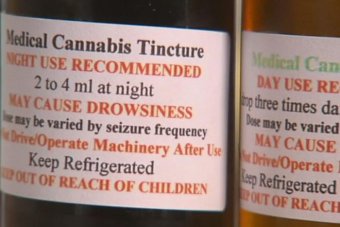 Professor Michael Farrell, the director of the National Drug and Alcohol Research Centre, headed the study and said there was a high rate of medicinal cannabis use in Australia.

"This is the first time we have had figures like this, so it gives us an indication of the scale, and it gives us something to think about," he said.

Cannabis consumption is banned in most states and territories, although a clinical trial of its medicinal use will start soon in NSW.

In Tasmania, several users of medicinal cannabis, including the deputy mayor of the Break O'Day council, Hannah Rubenach, have come out publically to urge decriminalisation.

Denison State Greens MP Cassy O'Connor accused Mr Ferguson of being out of step with reality.

"What is happening here in Tasmania and in Australia is a massive civil disobedience movement where people who have chronic or terminal conditions or the parents of children with epilepsy are illegally obtaining medicinal cannabis because they know that it improves the quality of themselves or their loved ones," she said.
Findings important but caution urged

But Professor Farrell said while medicinal users of cannabis reported benefits, the supporting evidence was not clear.

"It's quite important to hear people reporting that they derive benefit from it," he said.

"But it's important that we not over-emphasise the benefits of cannabis, so that for instance somebody who mightn't want to ever take cannabis ends up taking it because they think it's going to help them."

Professor Farrell said the study also found chronic pain sufferers who used cannabis differed from those who did not.

"When we looked at the characteristics of people who were using it, we found that they were also people who reported higher levels of pain, and they had more difficult problems," he said.

"They were using more medications, they were a bit younger and some of them also had a history of other substance use."

In a statement, Mr Ferguson said he would like to see a collaborative approach between the states and territories on medicinal cannabis.

The Tasmanian Opposition called for medical trials as the first step in ensuring that medicinal cannabis can be prescribed by doctors.