Cannabis Anthocyanins: A Closer Look at the Color Purple in Cannabis

Folks love purple pot. But what causes this variation and what can be done to manipulate it further? This report from our special correspondent, Chewberto420[1], breaks it down. 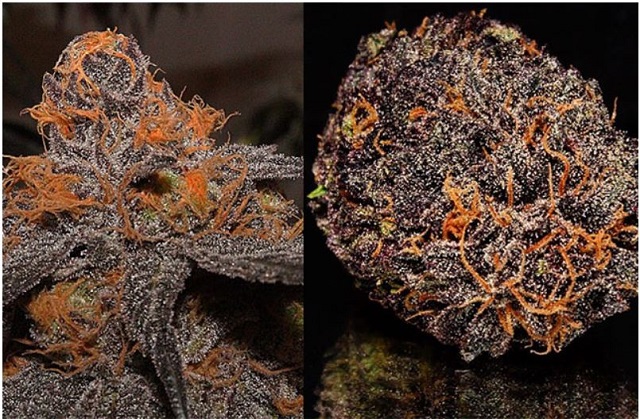 The answer is Anthocyanins. The word Anthocyanin was created by a German botanist named Ludwig Marquart in 1835. The word "anthocyanin" is derived from two Greek words - anthos meaning Flower and Kyanos meaning blue, which translate to “Blue Flower.” Anthocyanins are water-soluble flavonoids which contain coloring pigment usually found in the epidermal layer of plants. The range of the color spectrum vary from blues and purples, to pinks and magentas depending on the pH. The anthocyanins are present within the vacuole of the cells in plants tissues, leaves, fruits, and flowers. The pigment can also travel up trichome stalks from the bract where the trichome[2] is attached, and even sometimes within the trichome head itself. Anthocyanins are powerful pigments compounds, and cannabis only needs to produce small amounts of these chemicals to produce a strong color.

Why are Anthocyanins Present?

During a plant's life cycle[3], the leaves go through changes creating phytochemicals for various reasons which give plants their color, anthoxanthins (white/cream), carotenoids (yellow/orange), chlorophyll (green), lycopene (red), and cnthocyanin which make up the vibrant purple and blue color in plants. Each of these compounds play a unique roll in the nature of a plant's life, as well as its survival.

It is possible to extract anthocyanins with hash oil by applying a technique called “Rosin,” popularly known as “Rosin Tech[6]."

Rosin Tech is the process of using steam vapor pressure to penetrate the cuticle/membrane of the trichome heads and trichome stalks on the flower/bud to release the essential oils containing the sensitive terpenes and cannabinoids within. This process can create a colorful hash oil if done early enough in the hang-dry process[7] at harvest.

Typically, Rosin Tech is applied when the flowers have gone through a complete hang-dry process, and a majority of moisture has dissipated from the flowers. After the water content has been reduced drastically, the pH of the plant has increased, and the hash oil tends to be a golden/yellow. However, if we allow the flowers/buds to maintain their acidic pH early in the hang-dry process or right at harvest, the anthocyanins stay mobile and soluble and are extracted with the trichomes, essentially “dyeing’ the oil purple as it is forced away from the flower.

There is a short window of time in which one is able to extract these colors. As the plant dries, its pH starts to change making it impossible for the color to be extracted. The reason being that anthocyanins are highly unstable and extremely susceptible to degradation. Many factors can attribute to their degradation, such as temperatures, pH, light, and oxygen amongst other exposures.

The sensitivity of anthocyanins can be observed while dabbing the Anthocyanin dyed rosin, As the oil comes in contact with heat exposure, you’ll notice the oil return to the colorless carbinol base, and the colorful pigments in the hash oil will disappear immediately.

The mysteries behind anthocyanins are relatively unknown. Can we preserve our health, food, and concentrates longer by incorporating these anthocyanins? Could there be more to add to the list of benefits? Anthocyanins are not present in cannabis in high enough amounts to be considered an active ingredient, but we may not have all the answers quite yet, but with all that we do know it would be within good reasoning to continue testing and expand research.

Don’t forget to eat your blueberries!

All photos by Chewberto420 except for trichome shots, photographed by Biergoggles[8][9]